Nobia AB is a Swedish public limited liability company domiciled in Stockholm, Sweden. The company is the Parent Company of the Nobia Group. The basis for the control of the Group includes the Swedish Corporate Governance Code, the Articles of Association, the Swedish Companies Act, the Swedish Annual Accounts Act and Nasdaq Stockholm’s Rule Book for Issuers.

Nobia has applied the Swedish Corporate Governance Code (the Code)
since July 2005 and the company had no deviations to report for 2020. Nobia also applies the Swedish Annual Accounts Act concerning the com- pany’s corporate governance reporting.
Nobia monitors developments in the area of corporate governance and continuously adapts its corporate-governance principles to create value for its owners and other stakeholders. By way of information, it is noted that there were no breaches of applicable stock-exchange rules or good practice on the stock market based on decisions by Nasdaq Stockholm’s Disciplinary Committee or statements by the Swedish Securities Council.

The following information is available at the Corporate Nobia site:

Overview of Governance at Nobia 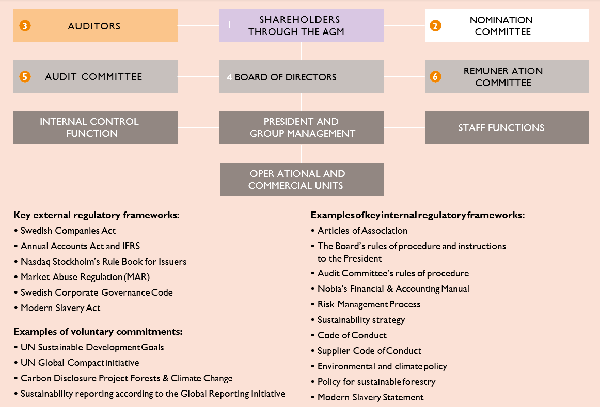 Individual shareholders wishing to have a specific matter addressed by the AGM can do so by submitting a request to Nobia’s Board in good time prior to the Meeting, to the address published on the Group’s website.

Nobia is a Swedish public limited liability company that is subject to the Swed- ish Companies Act, Nasdaq Stockholm’s Rule Book for Issuers, the Swedish Corporate Governance Code and the company’s Articles of Association. Shareholders exercise their influence at the general meeting of shareholders, which is Nobia’s highest decision-making body. Nobia has one class of share with one share corresponding to one vote at general meetings. Additional information about the Nobia share and ownership structure can be found here.

The AGM resolves on the Articles of Association and at the AGM, which is the annual scheduled general meeting, the shareholders elect Board members, the Board Chairman and auditors, and decide on their fees. Furthermore, the AGM resolves on the adoption of the income statement and the balance sheet, appropriation of the company’s profit and discharge from liability for the Board members and President in relation to the company. The AGM also resolves on the composition and work of the Nomination Committee, and resolves on principles for remuneration and other employment conditions for the President and other senior executives.

The Code states that in its proposals on Board members, the Nomination Committee is to pay particular attention to the requirement of diversity and breadth on the Board and the requirement of an even gender distribution. The Code also contains certain requirements regarding the composition of the Board of Directors. The Board is to have an appropriate composition with respect to the company’s operations, stage of development, strategy and other circumstances, and be characterised by diversity and breadth in terms of the competence, experience and background of the Board members elected by the AGM.

In performing its other duties, the Nomination Committee shall fulfil the requirements incumbent on the Committee in accordance with the Code.

The AGM elects the auditor who examines the Annual Report, consolidated financial statements, the administration of the Board and President, the Annual Report and accounts of subsidiaries, and also submits an audit report.

In accordance with Nobia’s Articles of Association, the Board is, to the extent appointed by the General Meeting, to comprise not fewer than three and not more than nine members, with not more than three deputy members. A maximum of one Board member elected by the AGM may work in company management or in the management of the company’s subsidiaries. Furthermore, a majority of the Board members elected by the AGM are to be independent in relation to the company and company management.

Find out more about our strategy, our kitchens, about Nobia as an investment, and our sustainability work.